What configurations are and do

Configurations are formed when three or more planets come into mutual aspects with one another, within an acceptable margin of time. The size of this margin depends on the speeds of the planets involved. Uranus', Neptune's and Pluto's aspects with each other can influence a period of up to 3-10 years, while Chiron's, Saturn's and Jupiter's aspects can affect periods of months or up to maximum one year.

The power of configurations depends on a few factors: mainly the types of aspects involved and the individual planets involved. Historically, the major aspects of Neptune and Pluto are of the greatest importance here. If these, or Uranus, are involved in a major mutual aspect, immense historical forces can be deemed to be at work – whether or not they manifest in blatantly obvious events.

On the Neptune-Pluto conjunction of 1892, the car and the aeroplane were being developed – yet this was happening in isolated workshops, and most people did not hear of it at the time. Cars and planes made their effect later, when they impacted on people's lives, yet the time of invention represents a key historic moment when potentiality turned into actuality, and the process of impacting on society was begun.

In this sense, it is important to look just only at events occurring during a configuration, but also at the processes which are set in motion, which do not subside when the configuration passes – they develop therefrom, over decades and centuries.

If Chiron, Saturn or Jupiter enter the equation, to make a configuration with a Uranus, Neptune or Pluto aspect or configuration, they give it an extra kick. Since the faster outer planets operate more in the realm of the social and the concrete, this can create specific and distinct events with enormous symbolism – an example being the configuration of November 1989, in which Uranus and Neptune, approaching conjunction in 1993, were conjuncted by Saturn and opposed by Chiron and Jupiter, the result being the fall of the Berlin Wall.

The zodiac signs in which a configuration takes place greatly affect the issues which arise. Sometimes the signs illuminate the underlying themes inherent in the configuration, though sometimes they can be literal too. In the French Revolution, Uranus in Aquarius (the people and the mob) literally beheaded Pluto in Leo (the king), thereafter fundamentally changing the nature of politics.

Some configurations are exact within a short space of time – a few years. A few examples:

Other configurations are looser in time, being, more accurately, a sequence of major aspects in close succession (within 7-20 years). These create 'busy times', though they are not quite as high-powered and deep-digging as more exact configurations. Examples:

In approximate (and not rigid) order of magnitude, the major kinds of configurations are the following: 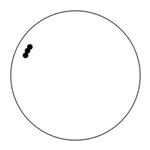 * Stellium or Multiple Conjunction. Here, three or more planets conjunct each other within close succession. Amongst the outermost planets, this has happened only once in recorded history, in the 570s BCE – though within only three years. The next conjunction comes in over 13 centuries' time in 3370. Of a lesser kind, 1989 saw a stellium involving Saturn, Uranus and Neptune, and stelliums of this kind are more common. A stellium represents a tremendous ending and new beginning, a concurrence of three or more cycles. The past is lost, and a journey into a wide-open future follows. 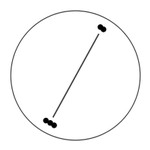 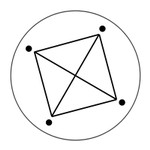 * Grand Cross. These are rare, requiring a fortuitous constellation of four planets in four squares (and two oppositions) to each other. It symbolises a crunch period, where times can be hard and ruthless for some and a breakthrough and great achievement for others. Most of the instances (not including those involving the inner planets) involve two of the outermost planets being squared up with Jupiter and Saturn. In 1565-1568 there was a major grand cross, involving Uranus opposing Neptune, squared by Saturn opposing Pluto. In Europe, these were times of religious wars and persecution, overseas expansion and accelerating prosperity and social change. Note also the grand cross of 22-26 CE, the configuration which preceded Jesus' Ministry. 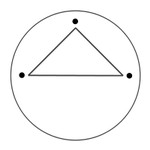 * T-Square. More common, these comprise an opposition with another planet squaring it. These present acute situations in which a lot happens, and chunks of the world go through enormous carve-ups, busy periods, shifts or shocks. Great effort has to be invested, though remarkable developments can take place, such as the configuration of 657-668 mentioned above. 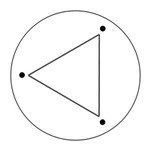 * Grand Trine. Unusual. A triangle with three outer planets in mutual trine to each other. This can bring easy times, up to the point of laxity or sclerosis, or periods of flowering in which the pressure lifts, allowing 'non-essential' yet important cultural developments to take place. Trends are expanded upon, and things run along nicely. Boundaries can become loosened, leading either toward prosperity and security, or toward degeneration and slow disintegration. Examples are: 730-740, with Uranus, Neptune and Pluto in trine between earth signs, which brought the Carolingian ascendancy and zeniths in India, Japan, China, Kiev (Ukraine) and Cordoba (Spain); and 1768-1773 (earth sign trines again), marking, in Europe, the peak of the Scientific Revolution and Enlightenment and the seeds of the Industrial Revolution.

* Other Trine-Sextile formations. These bring generally progressive and dynamic periods, with much going on. The life-energy of humanity quickens, and obstacles are overcome. The configurations which crop up are:

+ Sextile-Trine-Sextile, bringing a free-flow of progress and movement, sometimes fast and willynilly, sometimes ill-considered and automatic, sometimes brilliant. For examples, look at 47-61 CE, 302-308 and others; 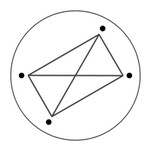 + Rectangle: Trine-Sextile-Trine-Sextile, bringing acute times where issues are large and yet solutions and changes come productively, often to resolve conflicts. Often a peak period, such as in 1538-1541, at the peak of the Reformation in Europe; 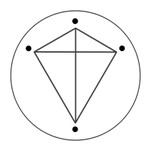 + Kite: a grand trine bisected by an opposition, forming two extra sextiles. Interestingly, there has not been an instance of this configuration occurring during the historical period of this ephemeris, involving four outer planets – though there are times when inner planets form them, together with two or three outer planets; 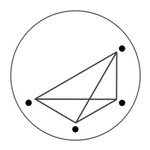 + Bowl or Cradle: an Opposition and three sextiles, bringing a highly productive and enriching period, with dilemmas.

* Octile Triangles. This is a family of configurations involving oppositions, squares, semisquares and sesquiquadrates working together. They bring acute situations where longterm issues and consequences must be faced, and longterm objectives pursued. Breakthroughs or work done in the present do not necessarily bring immediate reward. These configurations include the following: 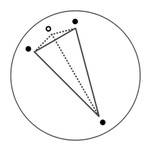 * Yod – Quincunx-Sextile-Quincunx. This brings a crisis of perspective and significance or a reality-conflict, wherein choices and perceptual shifts must be made to equate intentions and beliefs with presented reality. Irreconcilable dilemmas can surface, catalysing movement toward eventual fruitful, or expedient, ends. Stalemates, or attempts to overcome them. One example: in 1978-1979, Neptune sextiled Pluto, and both were quincunxed by Chiron.

Irregular triangles. A variety of triangles and even quadrangles can arise, increasing the tempo and energy-charge behind change in a variety of ways, upping the stakes and precipitating motion. These can include:

The way in which the planets move in relation to one another, there are perpetually-different configurations which form over time, and there is an elegance and beauty to configurations which appear. These are the major crossing-points of history, in which humanity's big squeezes, greatest moments and deepest downfalls happen – often with different variations happening in different parts of the world. Since historical events begin in the minds and hearts of people, configurations can help us identify consciousness-shifts which, whether or not they are accompanied by dramatic or significant events, nevertheless shape history. Often the issues of these times are enacted by small numbers of people somewhere (such as Gutenberg in his printshop), yet the longterm impact of their efforts, whether or not they are remembered for it, is significant.

'Phenomena' represent quirks of planetary motion which also have their interest value. In the timelines, Perihelia-Aphelia and Nodal Crossings are shown, but, to prevent crowding the timelines, Midpoint Aspects and Lunar Maxima and Minima are given only in the tables of Part Four of the Historical Ephemeris.

* Perihelia and Aphelia. When a planet is closest to the Sun on the course of its orbit, it is in perihelion, and when furthest, it is in aphelion. Its influence is more strong and precipitative when in perihelion, and less prominent and more steady when in aphelion. The positions in the zodiac where these perihelia and aphelia happen change only slowly. The most dramatic variation happens for the two eccentric outer planets, Pluto and Chiron. Pluto perihelia are important in history, precipitating events which can have built up over a long time. This can be regarded as the peak of the Pluto cycle – currently in Scorpio. Neptune and Uranus perihelia are not so emphasised as those of Pluto.

* Nodal Crossings. A planet's nodes are a theoretical point, where the plane of that planet's orbit around the Sun intersect the plane of the Earth's orbit around the Sun. In most cases, the inclination between these planes is very small, except in the case of Pluto and Chiron again. Seen from Earth, it means that the planet is either north or south of the ecliptic, a line drawn through the heavens denoting the Earth's orbit around the Sun. They cross the ecliptic at the planetary nodes. The most well-known nodes are the Moon's, which move backwards round the zodiac every 18.6 years – this is connected with the Lunar Maxima and Minima mentioned below. When north of the ecliptic, a planet expresses itself more clearly and outwardly in the northern hemisphere of our world, and more indirectly and introspectively in the southern hemisphere. Vice versa when a planet is south of the ecliptic. When a planet crosses its nodal axis, a new element can creep into history, which wasn't there previously – new outlooks or nuances which can affect people's values and activities. These are subtle and lesser factors in our study of astro-history, yet they have their meaning nonetheless.

* Aspects to Midpoints. Midpoints are a theoretical moving place in the zodiac which constitute the literal middle point between two planets – where their joint energies can be considered to balance. If a third of the outer planets activates this midpoint, mainly by conjuncting or opposing it, an energy or situation can be sparked off which sparks off quite profound historical processes. Worth watching are the Uranus conjunctions and oppositions to the Neptune-Pluto midpoint.

* Lunar Maxima and Minima. These were important to ancient peoples, as demonstrated in ancient remains worldwide, and probably denoting generations of people, or ancestors, to them. The Moon orbits the Earth on a plane which is inclined 5° to the Earth's orbital plane around the Sun. Where these planes intersect are the Moon's Nodes, which move backwards. When the North Node crosses the cusp (boundary) between the signs Pisces and Aries, the Moon is at its Maximum – that is, it will be visible to reach its highest and lowest points in the sky. When the North Node is in Libra, the Moon's swinging high and low in the sky is least emphasised. The Maxima thus represent an accentuation of the energies of the Moon, with an 18.6 year cycle. A table of Maxima and Minima are given in Part Four.

Here we end the section on Astrological Groundrules. If the thoughts above interest you, there are more observations on astro-history in the series of articles in Part Five.

NEXT: Introduction to the historical timelines
BACK: Planetary Cycles

The Historical Ephemeris
by Palden Jenkins
Astro-historical tables for 2,500 years
Privacy: I'm not interested in your private data. This site collects stats to observe general traffic only. I'm not into capturing data, giving your data to others or making mailing lists. Any problems, please contact me. And: by necessity (big data tables) this site is not mobile phone friendly! Sorry. Enjoy your visit! Palden.
Back to content